Murder of Dalits for land snatching

जुलाई 01, 2015
DANGAWAS in Nagaur district of Rajasthan is just 59 kilometres from the tourist town of Pushkar. The village was in the news recently for the wrong reasons: the wanton killing of six persons on May 14, five of them members of a Dalit family. A dispute over the ownership of 3.77 hectares of land saw the majority residents of the village getting mobilised on caste lines, with the sole intention of “finishing off” the claimants to the land, who in this case happened to be 16 members of the Scheduled Caste Meghwal family.
According to the first information report (FIR), a mob of around 200 Jats (survivors say there were more) chased them, beat them with sharp objects, set fire to their possessions including trolleys, and razed a brick dwelling that had been constructed on the field. Three people died on the spot and the others succumbed to their wounds in hospital. The dead and the injured were reportedly run over with tractors. The only person other than the Meghwals—Ratnaram, Pokarram, Pancharam, Ganpat and Ganesharam—to die was Rampal Gosain, a non-Dalit, who succumbed to injuries from a bullet. The source of the firing is still shrouded in mystery.
Even the women of the Dalit family, young and old, were beaten mercilessly. They and some of the young men, who were admitted to the Jawaharlal Nehru Civil Hospital at Ajmer, are the only witnesses to the carnage. Some women alleged that they were molested. The events that led to the premeditated attack on the Dalit family started with Ratnaram Meghwal staking his claim to the piece of land by constructing a dwelling on it in the first week of May. He was, he reckoned, the rightful and legal owner of the plot. 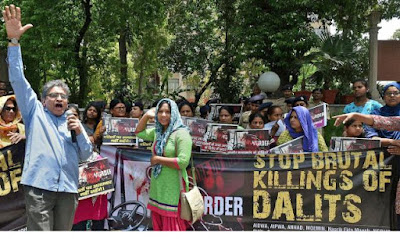