जुलाई 06, 2015
An elderly Dalit farmer was murdered on Sunday morning (05/06/2015) by three persons at Chinhat area of Lucknow. Following the incident, family members of the deceased and villagers blocked Lucknow-Faizabad Road.

Ramlal Rawat (65), a resident of Shahpur village, left his home early for his fields. His wife Rammo alleged that four brothers — Ranjit Yadav, Vijay Yadav, Raju Yadav, Sanjay Yadav — and Vijay’s son Ajay killed her husband. She added that they chased her husband with a sharp-edge farming tool and later killed him.

Gomti Nagar Circle Officer (CO) Satya Sen Yadav said: “Rawat’s family was involved in a dispute over a land, which according to accused Yadav brothers was bought by their father but registered in Rawat’s name. The reason could be that as the land belonged to a Dalit, it could not be bought by a non-Dalit. 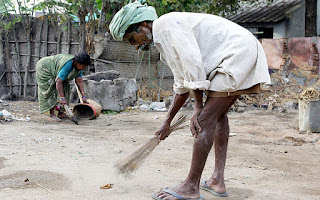 Rawat recently sold the land to someone else, leading to fresh tensions. He was found dead with injuries on his neck.

Following the murder, Rawat’s family and villagers blocked Faizabad Road, demanding action against the accused. They also protested against the police officers who reportedly declined to take them along for the post-mortem examination. “The family members were pacified and the road was later opened to traffic. No accused persons have been arrested,” said the CO.