जून 08, 2015
Two Dalit families of Vaddarahalli in Chikkamagaluru taluk have allegedly been socially boycotted by the people of Kuruba and other community people for refusing to continue with duties performed by their ancestors. The decision was allegedly taken in a meeting convened by upper caste people on May 30 and it has been in effect since then. 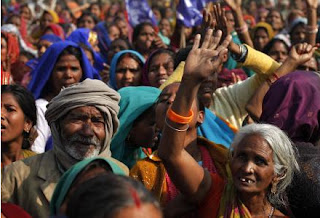 As per the decision, villagers are not to interact with Siddaiah and Rangaiah, brothers, and their family members in the village. Grocery shops and milk booth have allegedly been told to not sell anything to these families.
All this, according to Siddaiah, was because he and his brother refused their traditional “duty” as town criers. “During Ugadi celebrations, they (upper caste people) ask us to spread the message of village festival by going around the village beating drums. My brother refused. Since then they have been angry with us,” he said.
A week ago, one of the villagers, Ninge Gowda, picked up an argument with a woman of the Dalit community on the same issue. “I supported the woman. He convened a meeting of village people on May 30 and imposed penalty of Rs. 2,001 each on me and my brother alleging that we insulted him. We refused to pay penalty and later social boycott was imposed,” he told The Hindu over phone on Monday.
Mr. Siddaiah has filed a complaint with Chikkamagaluru Rural police. He has named seven people in his complaint, which has not yet been registered. “We thought the police delayed to register the complaint due to Gram Panchayat elections. When they did not register the complaint even after the counting of votes was over, we approached the police and sought security,” he said.
The Dalits are worried as they are only two families in the village. “We need security first. Anything can happen. The police should register the complaint and arrest the accused,” he added.