जून 01, 2015
Congress president Sonia Gandhi on Monday wrote to Prime Minister Narendra Modi flagging the “distressing rise” in incidents of dalit atrocities and demanded that a bill to prevent such crimes is brought in the Monsoon Session of Parliament next month. 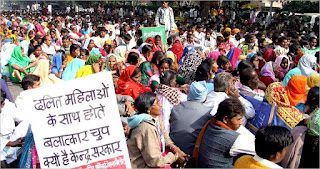 Referring to the incidents of dalit atrocities in two-BJP ruled states, Rajasthan and Maharashtra, the Congress chief also alleged that the NDA government had “allowed” an ordinance, brought by the UPA government, to lapse and slammed it for not bringing a bill to replace it in the last Budget Session of Parliament.
Mrs Gandhi’s letter to the PM comes a day before Congress vice-president Rahul Gandhi visits dalit icon B.R. Ambedkar’s birthplace Mhow in Madhya Pradesh on Tuesday to inaugurate the national launch of the year-long 125th birth anniversary celebrations of one of the architects of the Constitution.
The celebrations are being seen as an attempt by the Congress to reach out to dalits after its debacle in the last Lok Sabha polls, which saw the BJP making inroads among SC/ST voters in the Hindi heartland.
“I want to bring to your attention the distressing rise in the incidents of atrocities against dalits across the country. In Nagour district of Rajasthan, 17 dalits were mowed down by a tractor by members of another community over a long-standing land dispute. Four dalits have died while another is critical. Three months earlier, three dallits were burnt alive in the same district.
“Rajasthan is not isolated state. Other states have witnessed brutal assaults on dalits, such as the shocking instance of a dalit youth being murdered in Shirdi, Maharashtra, a stone’s throw away from the local police station, for having an Ambedkar ringtone on his mobile phone,” she said in the letter.
Holding that it is important for the ends of justice to ensure that a fair and an impartial inquiry is conducted in these cases and the guilty are punished as per law, she said that it is also equally important to ensure that the institutional machinery charged with the welfare and protection of dalits is strengthened and made accountable so that all dalits are able to access justice as a matter of right.
“It is with this intention that the UPA-2 government brought in an ordinance which, among other things, sought to strengthen the implementation of the SCs and STs (Prevention of Atrocities) Act 1989,” she recalled.