Crimes against Dalits are on the rise in Maharastra 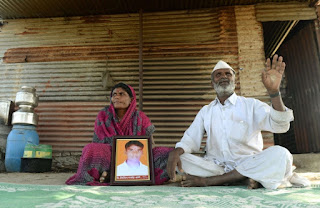 CASTE tensions are simmering in Maharashtra, where in the past 12 months alone there have been seven caste-related murders. The seemingly low figure is significant because the seven people lost their lives only because of the lower social status ascribed to them by birth. And the State revels in calling itself progressive and modern. The murders were of a gruesome nature; it was as if some vengeance was being exacted.

Only some of these cases have been registered under the Scheduled Castes and Scheduled Tribes (Prevention of Atrocities) Act, though on the face of it there are adequate pointers to a caste angle to all of them. Analysis of National Crime Records Bureau (NCRB) data for crimes against Scheduled Castes under the Prevention of Atrocities Act from 2001 to 2012 shows that Maharashtra had 3,210 reported cases of atrocities in this period. The State was ninth on the list, which Uttar Pradesh topped with 26,378 cases followed by Tamil Nadu with 10,845. Priyadarshi Telang of Manuski, an organisation that campaigns for social justice, says Maharashtra has an annual conviction rate of less than 3 per cent and thus holds the State “responsible for the increasing caste atrocities in Maharashtra”. The latest case, the murder of a young Dalit man in Shirdi, highlights the growing trend of violence against Dalits in Maharashtra. On May 16, nursing student Sagar Shejwal was murdered and his body mutilated. The reason for this brutality was something as innocuous as his cell phone ringtone, “Kara kitihi halla, majboot Bhimacha killa” (Raise your voice all you want, Bhim’s fort remains strong). It is a song of strength for Dalits, a rallying cry with its references to solidarity and community togetherness and the leadership of B.R. Ambedkar. The higher castes perceive it as defiance, especially if they nurture resentment towards Dalits. This is what seems to have happened in Shirdi.

Sagar had come home to Shirdi to attend a wedding. On May 16, he and two cousins went to a local beer bar. At some point, his phone rang and this apparently annoyed some men in the bar. Recounting the story later, his brother Akash said a man came up to Sagar and asked for his name. When he replied, he asked Sagar to switch off his phone. Sagar refused, saying it caused no one any problem. That innocuous statement, combined with his obviously Dalit surname, was enough for the man and his eight friends to attack Sagar and his cousins with beer bottles. Akash said the bar owner called the police who apparently replied they had no vehicle to come to the site. Akash pointed out that that the police station was just two minutes’ walk away.

As the fight turned more violent, Sagar got the worst of it. He was hit, kicked, punched, dragged out of the bar in a semi-conscious state, dumped onto a motorbike and taken away. His cousins alerted the rest of the family, but even a second appeal to the police station was turned down. The inspector apparently said, “He was just hit with a few bottles, wasn’t he? He will be back in the evening.” Unsatisfied with this, the boys gathered their friends and mounted a search. “We knew the general direction in which the bike had gone and kept asking people,” said Akash, “and we finally found his body in a jungle.”

Significantly, the fight was captured by the bar’s security camera. This played a big part in the six arrests that have taken place so far. But what happened outside the shop was far worse and for this there are no witnesses. Once he was dumped on the bike, Sagar was taken to a wooded area, where his body was later found stripped of clothes and with multiple fractures and telltale marks of a two-wheeler having been driven over him. The autopsy report said he died of multiple fractures. The six men have been booked, among other things, for murder and offences under the Scheduled Castes and Scheduled Tribes (Prevention of Atrocities) Act. Sagar’s assailants belong to the Maratha caste and Other Backward Classes (OBC).

The other six murders too highlight some commonalities. All of them were caste-specific. In all the reported cases, the aggressors were either from the Maratha community or from the OBCs, people belonging to communities just one level higher than Dalits in the caste hierarchy. Explaining this surprising lack of empathy for their kindred folk, Paul Divakar of the National Campaign on Dalit Human Rights says that those communities which were not traditionally “upper caste”, have now risen economically and are part of the power structure. Marathas, for instance, are new entrants to a higher social standing. Keen to maintain this, they ally themselves with the upper castes and prove their allegiance by stomping on the traditional underdog, Dalits.

Another commonality in the cases is the police baulking at registering cases under the Prevention of Atrocities Act. They either dismiss serious crimes as trivial offences (like the police inspector in Shirdi who told Sagar’s family that it was just a bar brawl) or introduce a “Dalit-boy-upper-caste-girl” love angle in order to lessen the gravity of crimes that actually have their roots in land-grabbing, sheer assertion of caste dominance, or rage by dominant castes at what they see as “defiance” or the lower castes “getting above themselves”. The Dalit writer and activist Anand Teltumbde said: “This comes handy for the police to divert attention and create indignation among the people. It is a typical ploy which extends to the judicial process too that the atrocity was not due to caste motive. Khairlanji [where four members of a Dalit family were killed in 2006] exemplifies it wherein the lower court dismissed the argument that there was caste motive in the gory incident.”

Some of the fatal crimes against Dalits in the past 12 months are listed below.

On April 3, 2014, a former sarpanch named Ganesh Chavan in Jalna district assaulted a Dalit called Manoj Kasab. The reason: Kasab became sarpanch thanks to reservation and Chavan was offended that he had been “usurped” by a Dalit. Kasab’s assailant was a Maratha and he was booked under the Prevention of Atrocities Act along with 10 others who had helped Chavan.

In almost all cases, counter-cases are filed and the victim or their family is forced to withdraw their original case. In the special courts there is a nexus [between the authorities]. They do things like not filing the charge sheet on time.

If the Prevention of Atrocities Act is to be seen as the deterrent it is meant to be, then cases need to be resolved with some speed. While constitutional and legal means of justice exist for Dalits, their implementation is sluggish. For many this is as good as no law.