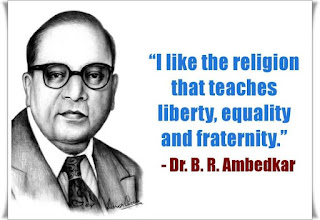 A statue of BR Ambedkar was vandalised at village Palahi near in Phagwara district on Sunday, sparking protests by dalits who blocked roads at many places in the district. The statue's raised arm was found twisted and damaged in a park at village Palahi, police said.

Protesting against the incident, members of dalit community blocked traffic on Phagwara-Chandigarh bypass in front of Palahi village, at Bhullarai crossing of the bypass and Phagwara-Palahi crossing on Phagwara-Hoshiarpur road, they said.

Led by BSP leader Jarnail Nangal and Ambedkar Sena Moolnivasi Punjab President Harbhajan Suman, protesters raised anti-government slogans. The protesters also threatened to call for a bandh on Wednesday if the culprits are not arrested by then.

They alleged that it was the second such incident of vandalisation in two-and-half-months. Earlier, a statue of Ambedkar was damaged in local Palahigate mohalla in the intervening night of April 4-5 and police failed to trace the miscreants, they alleged.

They also alleged that miscreants had intentionally vandalised the statues in the localities with dalit population in order to create tension. They demanded immediate arrest of culprits and security for all statues of Ambedkar.

The protesters lifted their blockades after DSP Manpreet Singh Dhillon assured them of prompt action. The protests kept the police on tenterhooks as Punjab Chief Minister Parkash Singh Badal was in Phagwara since last night and was holding Sangat Darshan programmes in villages there.